From Russia with surf!

In their music Messer Chups combine surf, beats, film samples, scratchy historical recordings, loungey and cartoon sounds from the 50′s and 60′s.The show is combined with video from trash cult movies of the middle of the last century – Betty Page, Bela Lugosi , zombies, Russ Meyer’s and Ed Wood’s heroes all mixed in videocollages of the master Gitarkin. Messer Chups is the project of Russian composer Oleg Gitarkin, and while the band’s instrumental rock is hard to neatly categorize, it’s safe to say that it would be enjoyed by fans of rockabilly, horror punk, scratchy surf records, Italian slasher films, My Life With the Thrill Kill Kult, pulp fiction, lounge music, Ed Wood, the theremin, the Cramps, Russ Meyer movies and the theme song from “The Addams Family.” Gitarkin incorporates all of these elements and more, layering samples from Russian B-movies over weird vintage keyboard chirps and groovy horn loops.

Messer Chups have already released over a half dozen albums and a greatest hits collection, which is a little extreme unless you’re a diehard fan of this kind of stuff. The trashy sci-fi horror sound of Messer Chups is not very common within the context of Russian rock music. The reason for this is the good old cold-war/iron curtain commie agenda. The majority of Messer Chups’ musical and visual aesthetics come from trashy western pop-culture of the past century. This includes horror/sci-fi b-movies from 1930′s through 1970′s, as well as music such as surf (The Ventures, Dick Dale, Trashmen), big-band lounge (Henry Mancini, Les Baxter, Martin Denny) and rock n’ roll of the 60′s.Since the Ipecac release, Messer Chups has slowly developed a cult following around the world as one of the most unique and genre-defiant bands.

Gitarkin formed Messer Chups in 1998 during an extended stay in Hamburg. The original lineup was Gitarkin on bass and Annette Schneider, a German music promoter, on synths. Though amicable enough, this lineup did not work as Gitarkin and Schneider lived in different countries, leading to hellish logistics. In 1999, Gitarkin returned to St. Petersburg and found a keyboard player in Igor Vdovin, former vocalist for the band Leningrad. They toured as a duo in Russia and the United States in 2000-02. In 2003 a world-famous theremin player Lydia Kavina joined the band. She is the grandniece of Leon Theremin, the Russian inventor of the theremin, an instrument whose ghostly waw was a fixture in horror movies of the 1940s and ’50s. Oleg and Lydia released together CD’s – Black Black Magic , Vamp Babes Upgrade Version. Lydia participated on few tracks of most famous through licensed to Mike Patton’s IPECAC Recordings album “Crazy Price”.

Zombie Girl came to the band in 2004.The founder of the project Oleg Gitarkin, is one of the most talented modern Russian composers, who became famous with his another project MESSER FUR FRAU MULLER in Russia and abroad. He is also making music for movies, theater and adverts. 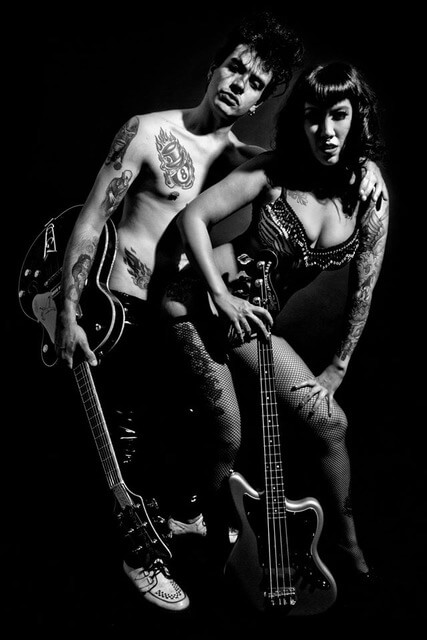 The band sounds like the devil’s music of Link Wray, Gene Vincent, Jerry Lee Lewis and Ricky Nelson remarkably shaked with The Cramps , Iggy Pop, The Cult, Gun club, Devo. Instrumental rock, surf, psychedelia, and sixties punk. And then, they added the junkiest element of all: themselves.

Mr Sinister Kris has been active in the worldwide rock’n’roll scene and collaborated with international bands like Boppin Kids (I), Rezurex (USA) and The Offenders (I/DE). He just started composing the first Kris & Lou album, Sinister Kris Combo, when he met Lou on the Rocks, international burlesque performer and artist.

The duo always have been fan of the 50’s/60’s classic tunes. Their voodoo beats and guitar riffs speak for themselves, but it’s the touch of 80’s punkrock that really charac- terizes the sound.

The band was looking back to the roots of rock’n’roll for a sound with a meaning. They wanted to bring back their music where it belongs: music for teenagers, when it was still a bad thing, when it was still the devil’s music, not sterilized by the major medias.

«I dig that goddamn Rock ‘n’ Roll / That kinda stuff that don’t save souls…» as Lux Interior used to sing.

So what are you waiting for, creatures of the night?! Beach parties, eyeball martinis, sexploited brains at the edge of a nervous breakdown!!! Whellcome to the show boys n girls!