Stockholm, Sweden’s best kept secret Normandie have today released the stunning single/video ‚Jericho‘ (via Easy Life)- the band’s first new music in 2 years since the ‚White Flag‘ album which celebrates over 24 Million Global streams to date. We all have our secrets. Whether we’re ready to face them or not, each and every one of us has something buried deep down inside that we desperately keep hidden away from the prying, judging eyes of the rest of the world. But sometimes those secrets become so powerful that they can no longer stay buried, festering and gnawing at our souls so much that they can stop us from living life to the fullest. He didn’t realise it until recently, but singer Philip Strand was harbouring one such secret for the longest time.

Not anymore. Now, the Normandie singer is ready to open up and share his true story for the first time, and the band’s propulsive, incendiary new single ‚Jericho‘ represents the first chapter in that tale. “When we first wrote Jericho I was actually singing about something else,” he begins. “It was originally about a relationship where the other person was very cold hearted and they didn’t really give away any emotions but it became increasingly clear that something else was driving the song.“

“Writing became like a therapy session for me, all of a sudden,” he explains, “I felt like there was something deeper I wanted to touch on. I wanted to touch base and just really go into this emotion. Something was driving me down there, into myself. So I made a conscious decision to write about my personal experiences for the first time. I felt like it was time. I went back and I switched some words around so that the entire meaning of the song shifted. It’s became about breaking down the old to give way and form something completely new…” 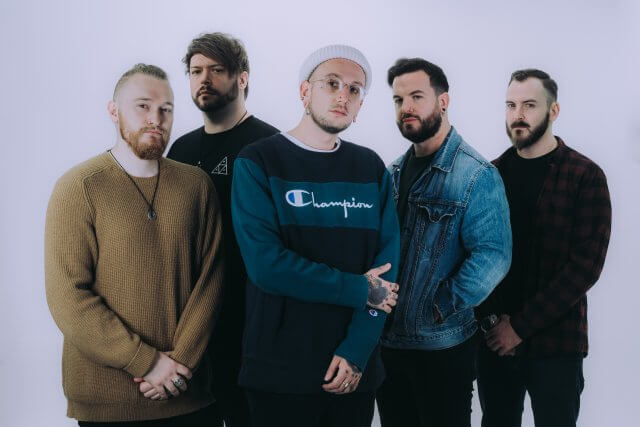 Our Hollow Our Home

Fast becoming one of the most important bands to watch in the UK metalcore scene the band formed in 2013 and soon embarked on numerous UK tours ahead of releasing their debut EP “//REDEFINE” in 2015. The following year they went on their first EU tour co-headlining with Imminence.In March 2017 they independently released their debut album ‘Hartsick’ to critical acclaim. The album went to #1 in UK iTunes Metal and Rock charts as well as top 10 and top 20 placings in numerous countries including USA, Canada, Australia, Germany, Italy and Mexico. A well timed cover of Ed Sheeran‘Shape Of You’ then went to #1 iTunes Metal Songs in the UK and received daytime play on Radio 1.Over the next 18 months the‘Hartsick’ touring cycle saw them complete several UK and EU headline tours as well as tours with Oceans Ate Alaska, Secrets, Glamour Of The Kill & Kingdom Of Giants. They also played numerous EU festivals including Graspop, Nova Rock, Jera On Air, Summerblast, Fajtfest, Free And Easy, Rock Den See & Traffic Jam Open Air.Following talks with a number of labels the band decided to independently releasetheir sophomorealbum “In Moment // In Memory’ in October 2018 through their own label, //Hollow Music. The album made the Top 10 iTunes Metal Chart in UK, Canada, Germany, Australia, Japan, Italy & USA.So far in 2019 they completed headline UK & EU runs and played sold out Scandinavian shows with Adept & Crystal Lake. They have recently headlined a stage at Teddy Rocks Festival,played both Slam Dunk Festival dates,supported Wage War on their UK/EU dates and performed at Camden Rocks Festival. Their summer shows will see them play several festivals including Jera On Air,Fajtfest,Overdrive and Rock Maraton in addition to some shows with Polaris & Bad Omens and some headliners.